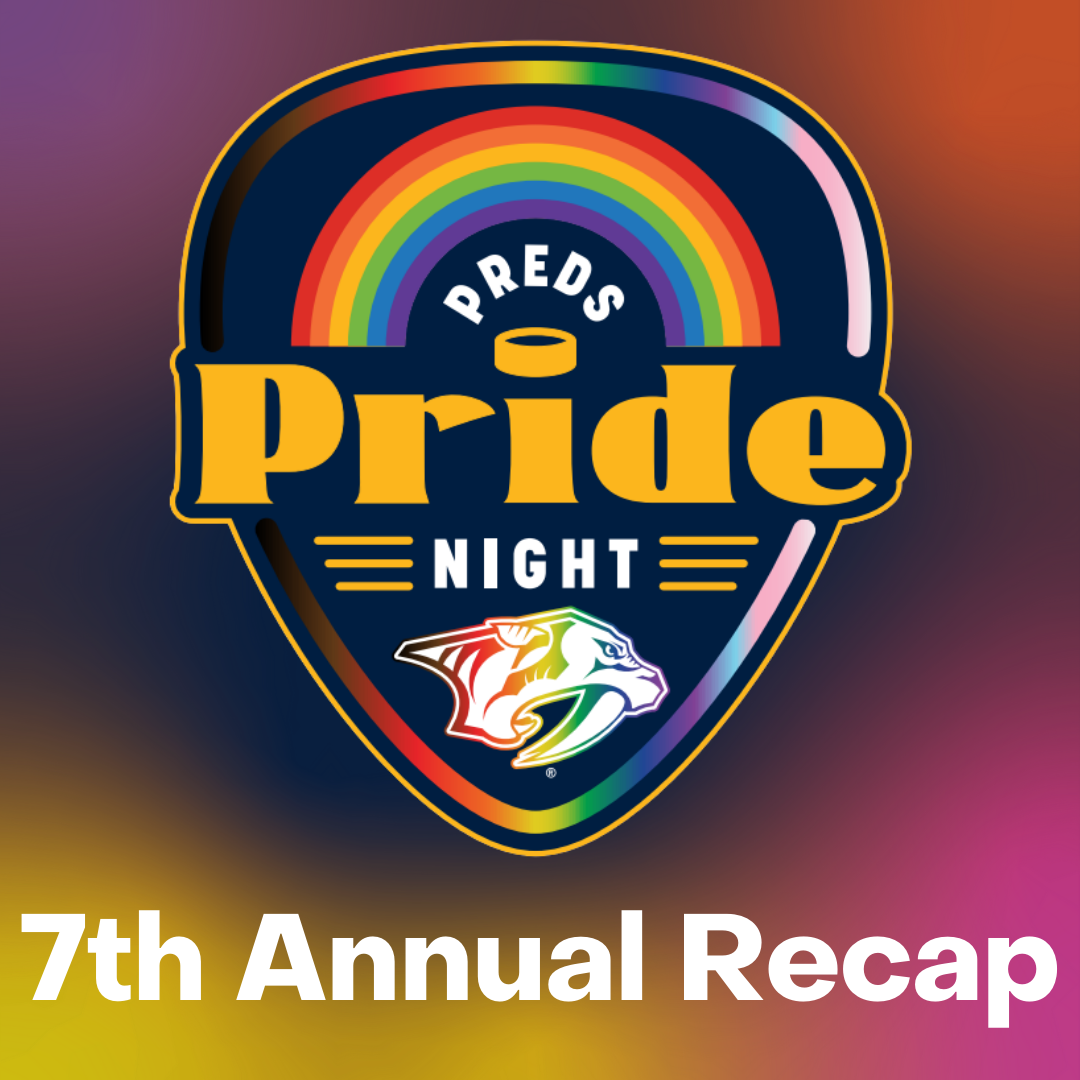 That’s a wrap! Over 500 people attended the 7th Annual Predators Pride Night on Tuesday, April 12th. The arena was lit in rainbows, LGBTQ+ community members were front and center, and we kept our winning streak alive! The Preds have never lost a game on Pride night and they won in overtime this year, what a night!

Highlights of the night included - 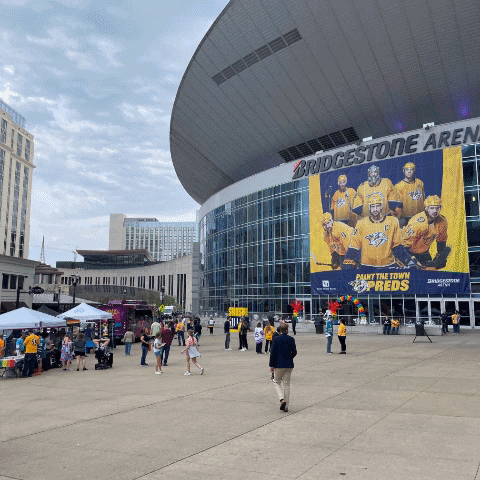 Pre-game Pride Plaza Party where some of our members participated in welcoming the community to the arena. The Nashville Cotton Candy Company served up some sweet treats, LaMarvelous Balloons decorated the beautiful space, Nashville Pride and Franklin Pride got everyone excited for June, Dell Technologies and Tractor Supply Co. proved you can bring your whole self to work, The Big Drag Bus put on a show, and QDP DJs kept the music going and people dancing! 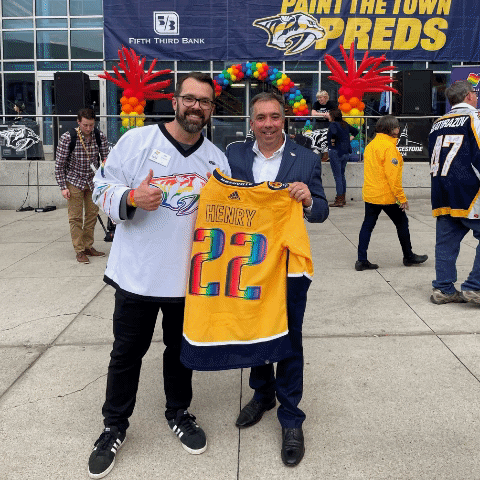 The Nashville Predators continue to set the bar! Thank you to President & CEO Sean Henry and his team for making Pride Night a priority. When they say Hockey Is For Everyone, they mean it! LGBT Chamber CEO Joe Woolley and Sean spoke to the crowd before the game. Watch the recording here! A special thank you to Robin Lee, Claire Francis, Rebecca King, and Curtis Sparrow for executing another successful event. 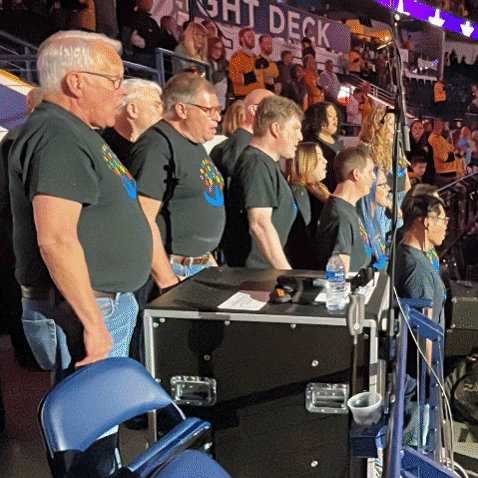 Nashville in Harmony sang the national anthem. Nashville in Harmony (NiH) is Tennessee’s first and only musical arts organization specifically created for people of all sexual orientations, gender identities, gender expressions, and their allies. With a mission of using music to build community and create social change, NiH brings people together within both the LGBT community and the community at large. Watch the full performance here. 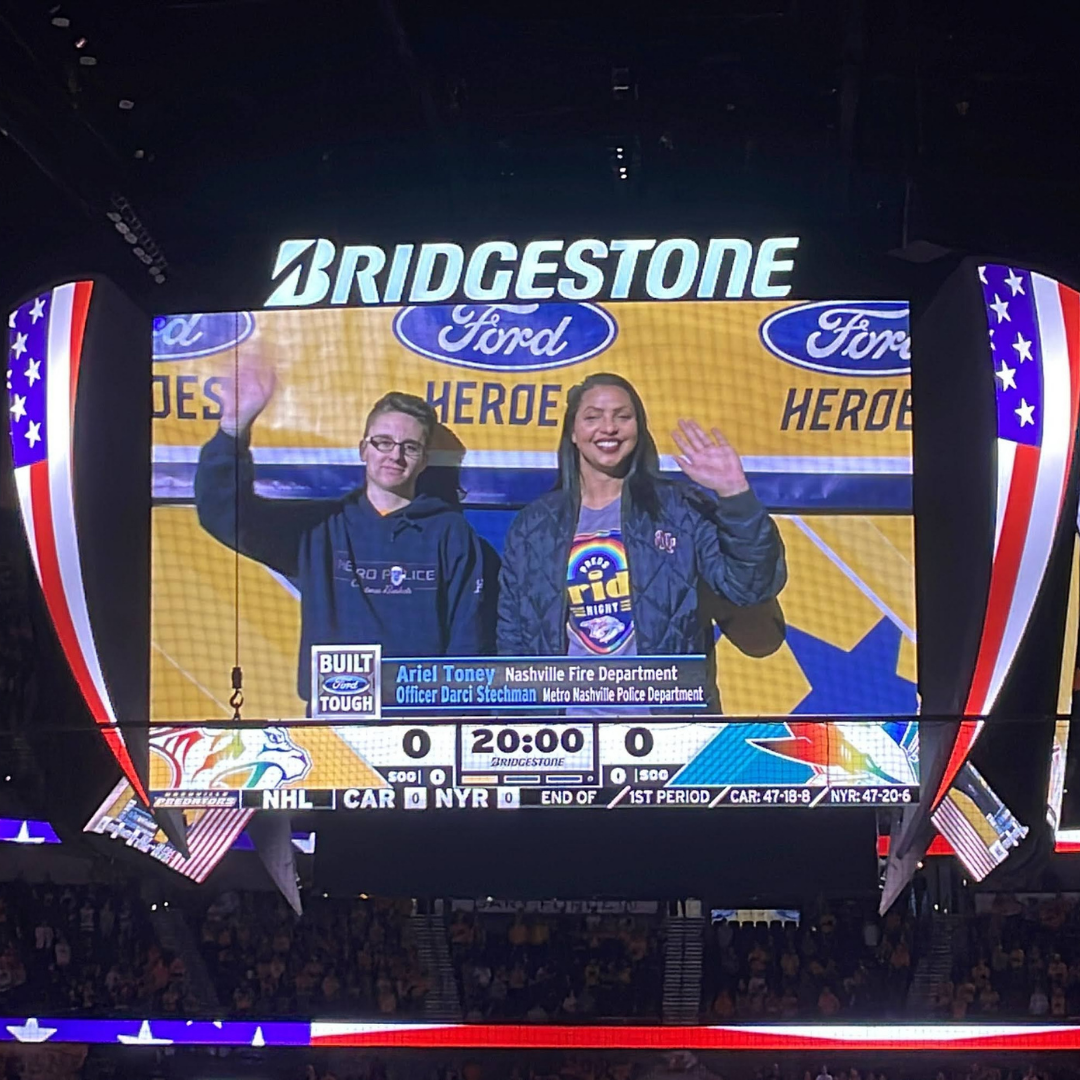 We were proud to honor Ariel Toney of the Nashville Fire Department and Officer Darci Stechman of the Metropolitan Nashville Police Department as the Predators Pride Night Heroes on Ice! You can watch the recording here! We work with these departments year-round and thank them for their commitment to diversity and inclusion in our community! Watch the tribute here. 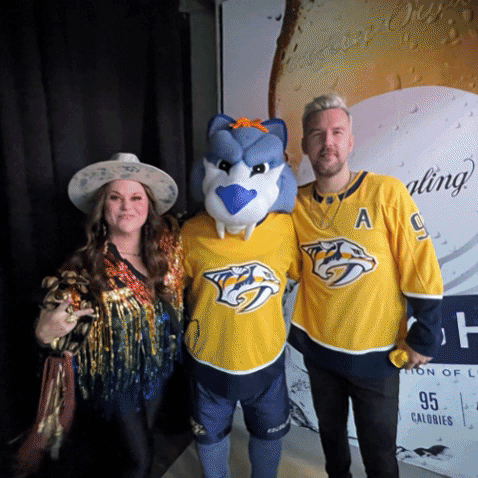 Out country music artist TJ Osborne of Brothers Osborne waving the Rally Towel. Watch the video here and here! T.J. of the Brothers Osborne is now the only openly gay artist signed to a major country label—a historic moment for the genre. Brothers Osborne recently won their first Grammy for the sibling duo’s song “Younger Me,” and that wasn’t the only first — it’s the first country song with an LGBTQ+ theme to win an award in the history of the ceremony. Look for TJ to be at more Chamber and community events in the near future! 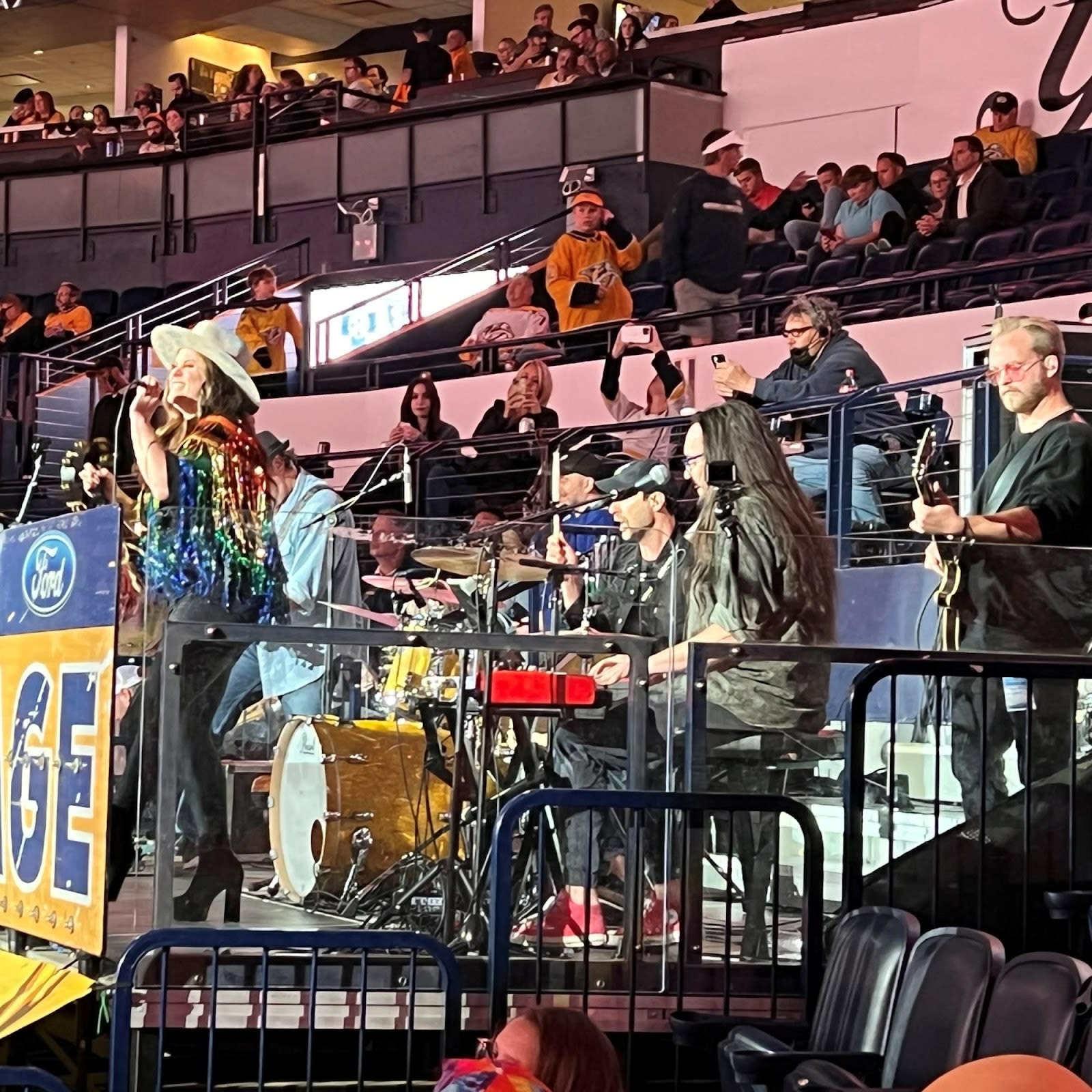 Our friend Shelly Fairchild rocked the Intermission Band Stage at Predators Pride Night! Watch the video here! Shelly has participated in our Pride in Local Music event and is a beloved LGBTQ artist in Nashville! 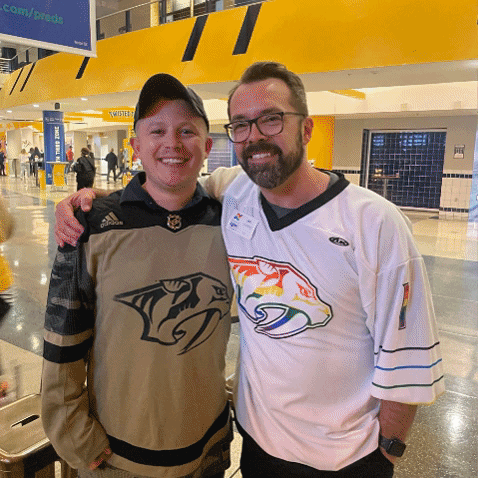 The Predators Pride Night Ford Military Salute highlighted Navy veteran Shanden Delamater. Shanden and his husband are active members of the LGBT Chamber and we thank him for his service! Watch the full video of his tribute here. 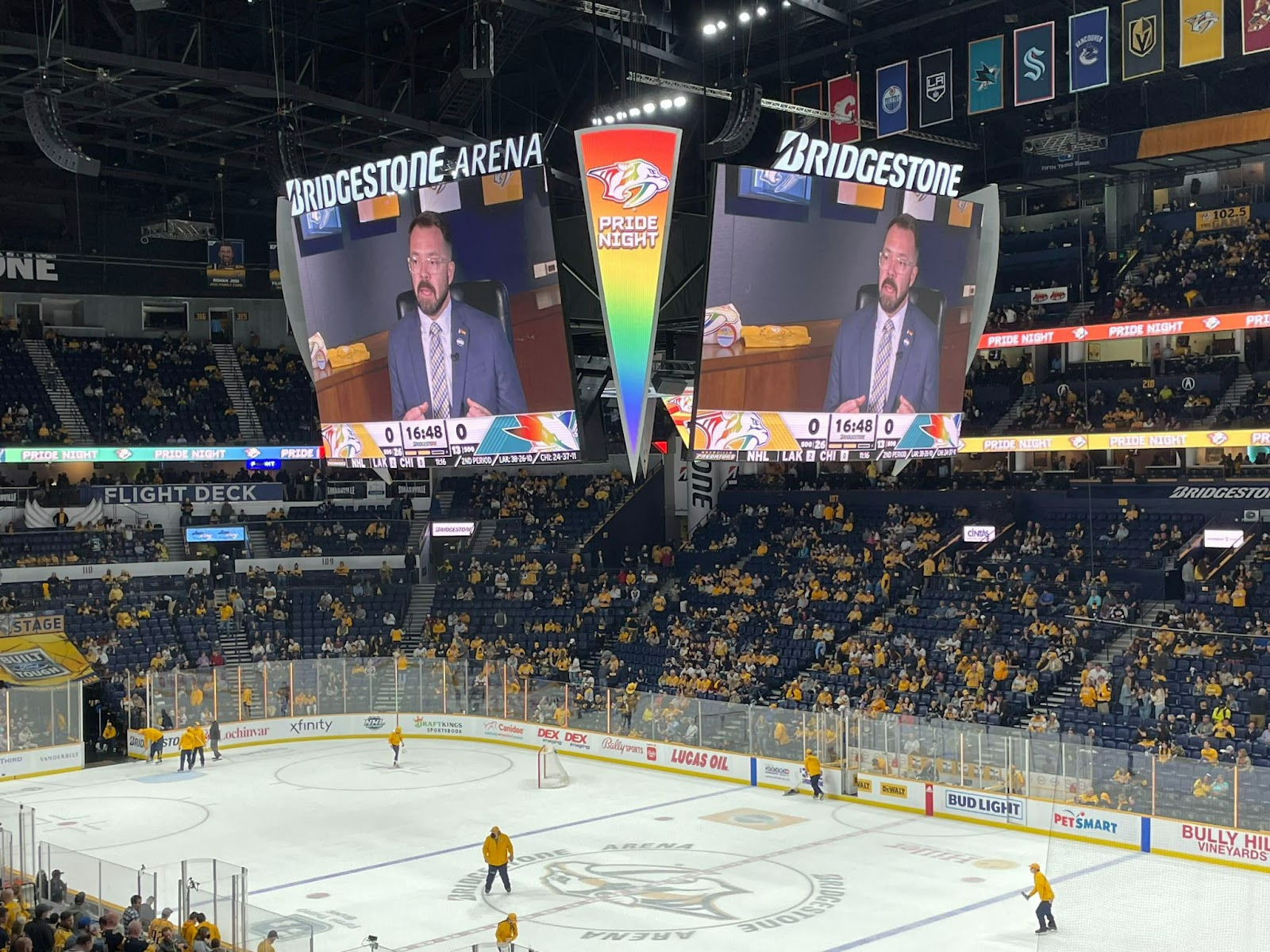 Our CEO spoke to the NHL and the Predators about the history of Pride Night and what “Hockey is for Everyone” means. The video played in the arena and on national television during the game, spreading the message of inclusivity and acceptance. Watch the full video here. 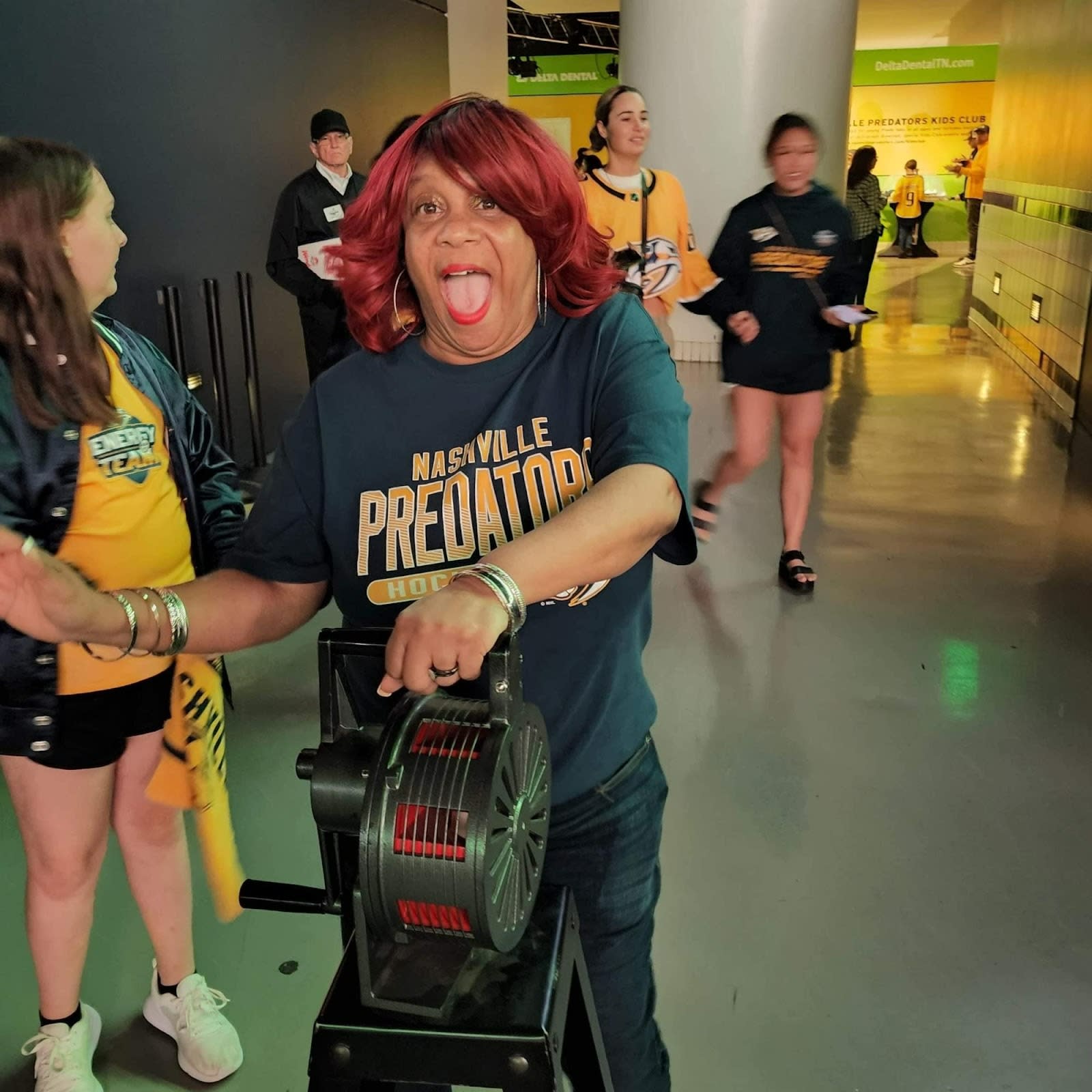 The Mayor of Smashville is Nashville Pride President Mac Huffington. Mac is a longtime community advocate and involved in several organizations (including past member of our board), has run countless drag pageants, and is the first Black president of Pride. Watch Mac crank the horn here! 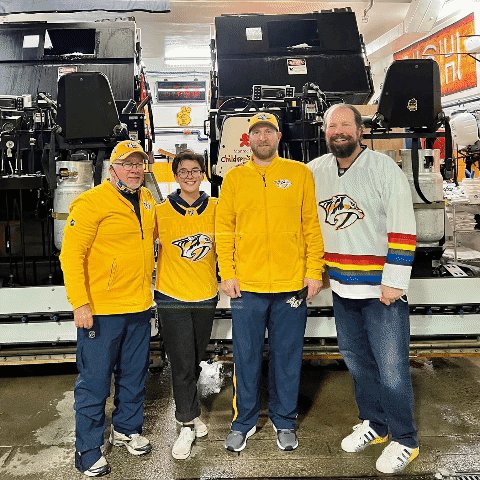 Some familiar faces were spotted on the Zambonis at Predators Pride Night! Membership Manager Lauren Bland and her wife Danielle, Board President Terry Vo, Past President Ron Snitker, Past Treasurer Clayton Klutts, and Trans Activist Jace Wilder had fun waving to fans!

You can see all the pictures from the night and add the ones you took!

We have already started planning with the Predators to make the 8th annual Pride Night even bigger and better than this one! We will see you in 2023 or sooner at Bridgestone arena! Go PREDS!!