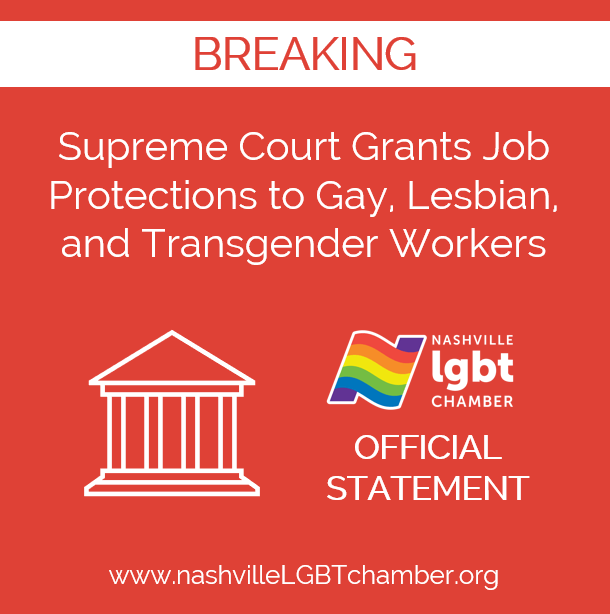 Nashville, TN (June 15, 2020) -  In a 6-3 decision, the Supreme Court has now ensured no employer has the right to discriminate against a person because of their sexual orientation or gender identity through the expansion of Title VII. The ruling grants federal job protections to gay, lesbian, and transgender workers to further advance the cause of LGBTQ rights. Conservatives Chief Justice John Roberts and Neil Gorsuch joined the court’s four liberal justices in the majority.

“This decision reminds us that change is possible when we pursue it from every avenue possible, advocating at the legislature, challenging discriminatory legislation through the courts, organizing and protesting in the community and voting for pro LGBT candidates in every election.” said Joe Woolley, CEO.  “We are particularly proud that even traditionally conservative justices agree that LGBT rights are human rights now enshrined in our laws.”

Business will continue to be the catalyst for continued advancement and positive change for our diverse and marginalized communities. Our 500+ members understand the economic imperative of inclusion and diversity within their businesses and through their policies.

Woolley continued, “After marriage equality 5 years ago next week, many LGBT and ally people thought the movement for equality was over. They did not realize that you could be married on Saturday and then fired on Monday in over half the country. 28 states had little or no workplace protections for the LGBT community. About 4.5% of the U.S. population, or roughly 11 million people, identify as lesbian, gay, bisexual, transgender or queer; 88% of them are employed.”

The LGBT community is a vital part of the American economy and deserves equal treatment under the law. This decision is a shining light in an otherwise tumultuous climate. This is a victory for our community and exemplifies the work of organizations like the Nashville LGBT Chamber. We will continue to advocate for LGBT rights in the workplace.