Featuring seven Nashville premieres and the return of HAMILTON 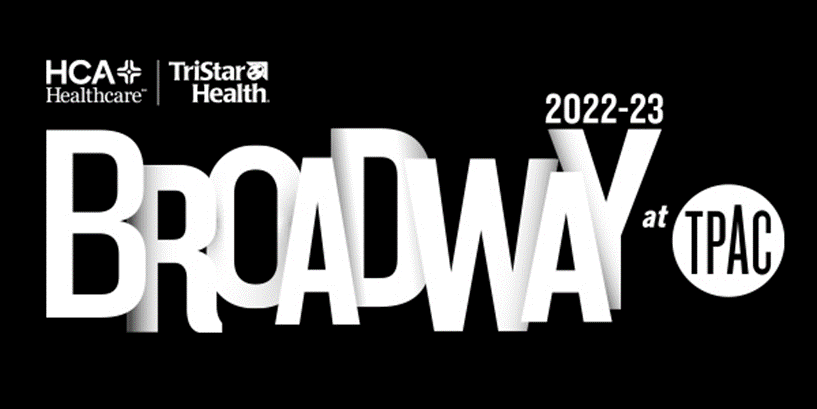 New season includes Harper Lee’s TO KILL A MOCKINGBIRD, PRETTY WOMAN: THE MUSICAL, HADESTOWN, AIN’T TOO PROUD – THE LIFE AND TIMES OF THE TEMPTATIONS, Disney’s ALADDIN and 1776

NASHVILLE, Tenn. – Get ready…‘cause here comes an unforgettable season of Broadway in Nashville as the nonprofit Tennessee Performing Arts Center announces its 2022-23 HCA Healthcare/TriStar Health Broadway at TPAC season, featuring the seven Nashville premieres plus the return of HAMILTON.

The 2022-23 Broadway at TPAC season lineup includes TO KILL A MOCKINGBIRD, Academy Award winner Aaron Sorkin’s adaptation of the Harper Lee’s Pulitzer-Prize winning masterwork; PRETTY WOMAN: THE MUSICAL, based on one of Hollywood’s most beloved romantic movies with an original score by Grammy® winner Bryan Adams and Jim Vallance; HADESTOWN, winner of eight 2019 Tony Awards® including Best Musical and the 2020 Grammy® Award for Best Musical Theater Album; SIX, an exuberant celebration of 21st Century girl power as the six wives of Henry VIII remix 500 years of historical heartbreak; AIN’T TOO PROUD – THE LIFE AND TIMES OF THE TEMPTATIONS, the electrifying new musical that follows The Temptations’ extraordinary journey from the streets of Detroit to the Rock & Roll Hall of Fame; Disney’s ALADDIN, a thrilling new production filled with unforgettable beauty, magic, comedy, and breathtaking spectacle from the producers of “The Lion King;” and 1776, a new production of the Tony Award®-winning musical, reexamining a pivotal moment in American history with a cast that reflects multiple representations of race, gender, and ethnicity.

With a nod to the past and a bold step toward the future, the upcoming Broadway season is a remarkable blend of history, mythology, revolution, and triumph that sets the stage for an unforgettable year of live theater.

“We’re thrilled to bring a new season of the hottest Broadway titles directly to your door. You don’t need to go to New York to see the latest shows because as a season ticket holder, you can experience all of them here at home with great savings and other benefits,” says Jennifer Turner, TPAC President and CEO. “It’s an honor to serve our city and region with world-class theatrical entertainment and this spectacular lineup featuring fresh perspectives of some of the most captivating, human, and inspiring stories for our time.”

Season ticket packages are available on Monday, Feb. 28. Packages start as low as $40 per show when you book all eight shows. Season ticket holders receive the best seats at the best price compared to purchasing shows individually and are entitled to additional exclusive benefits, such as easy exchange privileges, flexible payment plans, and savings on additional single tickets for any 2022-23 Broadway show at TPAC.

For full benefits, pricing, and seat map, visit TPAC.ORG/Broadway, where season tickets may be purchased, or call TPAC Patron Services at 615-782-6560.

TPAC celebrated its 40th Anniversary in 2020 during an extended shutdown in live programming due to the COVID-19 pandemic. Even at the height of the 19-month intermission, TPAC continued to serve tens of thousands of children, adults, artists, and educators with virtual programming and arts-based community outreach.

As a beacon of arts access in Nashville and Middle Tennessee and a cultural anchor institution in the community, TPAC made its triumphant return to live presentations in 2021 when it launched the 2021-22 Broadway season with “The Band’s Visit.” The return of touring Broadway to Nashville is a reminder that the organization continues to adapt and be resilient in the face of many challenges.

That resilience is supported by TPAC’s health and safety partnership with HCA Healthcare, one of the nation’s leading providers of healthcare services, and its Nashville-based TriStar Health affiliate. The partnership continues a decades-long relationship between TPAC and HCA Healthcare/TriStar Health, which has sponsored the annual Broadway at TPAC series for 15 years and made possible the presentation of more than 70 Broadway productions to over 1.5 million people.

HAMILTON is the story of America then, told by America now. Featuring a score that blends hip-hop, jazz, R&B and Broadway, HAMILTON has taken the story of American founding father Alexander Hamilton and created a revolutionary moment in theatre—a musical that has had a profound impact on culture, politics, and education. With book, music, and lyrics by Lin-Manuel Miranda, direction by Thomas Kail, choreography by Andy Blankenbuehler, and musical supervision and orchestrations by Alex Lacamoire, HAMILTON is based on Ron Chernow’s acclaimed biography. It has won Tony®, Grammy®, and Olivier Awards, the Pulitzer Prize for Drama, and an unprecedented special citation from the Kennedy Center Honors.

Harper Lee’s TO KILL A MOCKINGBIRD

All rise for Academy Award® winner Aaron Sorkin’s adaptation of Harper Lee’s Pulitzer Prize-winning masterwork. The New York Times Critic’s Pick TO KILL A MOCKINGBIRD is “the most successful American play in Broadway history.” (60 Minutes). Rolling Stone gives it five stars, calling it “an emotionally shattering landmark production of an American classic,” and New York Magazine calls it “a real phenomenon. Majestic and incandescent, it’s filled with breath and nuance and soul.” With Emmy Award® winning actor Richard Thomas playing the role of Atticus Finch in the National Tour and direction by Tony Award® winner Bartlett Sher, TO KILL A MOCKINGBIRD — “the greatest novel of all time” (Chicago Tribune) — has quickly become “one of the greatest plays in history” (NPR).

PRETTY WOMAN: THE MUSICAL, based on one of Hollywood’s most beloved romantic stories of all time, springs to life with a powerhouse creative team led by two-time Tony Award®-winning director and choreographer Jerry Mitchell (“Hairspray,” “Kinky Boots,” “Legally Blonde”). Brought to the stage by lead producer Paula Wagner, PRETTY WOMAN: THE MUSICAL features an original score by Grammy® winner Bryan Adams and Jim Vallance (“Summer of ’69,” “Heaven”), and a book by the movie’s legendary director Garry Marshall and screenwriter J. F. Lawton. PRETTY WOMAN: THE MUSICAL will lift your spirits and light up your heart. “If you love the movie, you’ll love the musical!” (BuzzFeed News). Are you ready to fall in love all over again?

COME SEE HOW THE WORLD COULD BE.

Welcome to HADESTOWN, where a song can change your fate. Winner of eight 2019 Tony Awards® including Best Musical and the 2020 Grammy® Award for Best Musical Theater Album, this acclaimed new show from celebrated singer-songwriter Anaïs Mitchell and innovative director Rachel Chavkin (“Natasha, Pierre & The Great Comet of 1812”) is a love story for today... and always. Intertwining two mythic tales — that of young dreamers Orpheus and Eurydice, and that of King Hades and his wife Persephone — HADESTOWN is a haunting and hopeful theatrical experience that grabs you and never lets go.

Divorced, beheaded, died, divorced, beheaded, survived. From Tudor Queens to Pop Princesses, the SIX wives of Henry VIII take the mic to remix 500 years of historical heartbreak into an exuberant celebration of 21st century girl power! This new original musical is the global sensation that everyone is losing their head over. The New York Times says SIX “TOTALLY RULES!” (Critic's Pick) and The Washington Post hails SIX as “Exactly the kind of energizing, inspirational illumination this town aches for! The Broadway season got supercharged!”

AIN’T TOO PROUD: THE LIFE AND TIMES OF THE TEMPTATIONS

Discover a whole new world at Disney’s ALADDIN, the hit Broadway musical. From the producer of “The Lion King” comes the timeless story of ALADDIN, a thrilling new production filled with unforgettable beauty, magic, comedy, and breathtaking spectacle. It’s an extraordinary theatrical event where one lamp and three wishes make the possibilities infinite. Hailed by USA Today as “Pure Genie-Us,” ALADDIN features all your favorite songs from the film as well as new music written by Tony® and Academy Award® winner Alan Menken (“Newsies”) with lyrics penned by the legendary Howard Ashman (“Beauty and the Beast”), Tony Award® winner Tim Rice (“The Lion King”, “Aida”), and book writer Chad Beguelin (“The Wedding Singer”). See why audiences and critics agree, ALADDIN is “Exactly What You Wish For!" (NBC-TV)

They knew they would make history, but not what history would make of them. Fed up with living under the tyranny of British rule, John Adams attempts to persuade his fellow members of the Continental Congress to vote in favor of American Independence and sign the Declaration. But how much is he willing to compromise in the pursuit of freedom? And who does that freedom belong to? Jeffrey L. Page and Diane Paulus, the Terrie and Bradley Bloom Artistic Director of the American Repertory Theater (A.R.T.) at Harvard University, direct a new production of the Tony Award®-winning musical, reexamining this pivotal moment in American history with a cast that reflects multiple representations of race, gender, and ethnicity.

Cameron Mackintosh presents the acclaimed production of Boublil and Schönberg’s Tony Award®-winning musical phenomenon, LES MISÉRABLES. This brilliant staging has taken the world by storm and has been hailed as “a reborn dream of a production” (Daily Telegraph). Set against the backdrop of 19th century France, LES MISÉRABLES tells an enthralling story of broken dreams and unrequited love, passion, sacrifice, and redemption – a timeless testament to the survival of the human spirit. The magnificent score of LES MISÉRABLES includes the songs “I Dreamed a Dream,” “On My Own,” “Bring Him Home,” “One Day More” and many more.

Institutional sponsors for TPAC include official health and safety partner, HCA Healthcare/TriStar Health and Nissan North America. TPAC is funded in part by support from the National Endowment for the Arts, Tennessee Arts Commission, and Metropolitan Nashville Arts Commission.